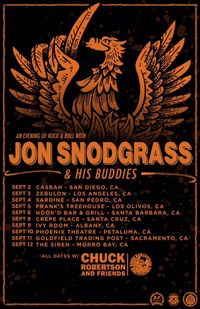 Doggedness Presents is excited to host an evening of Rock N Roll with Jon Snodgrass & His Buddies + Chuck Robertson and Friends and The Happys at the Phoenix Theatre in Petaluma!

A portion of the event's proceeds will be donated to the Phoenix Theater in support of their Music, Art, Job Placement and Teen Clinic programs. Grab a ticket, support touring bands, and a great historical venue that continues to nurture creativity in our community!

Jon is bringing the band for an evening of Rock N Roll! His recent album ‘Tace’ was released in October of 2020 and he is ready to bring it to the stage.

From New Noise Magazine: “Admittedly, it’s weird to use a term like endearing to describe an album by someone who is rooted so firmly in the punk world, but Tace is so unconditionally tethered to everything important to Snodgrass: music (both loud and soft/fast and slow), baseball, his family and friends, that it’s a perfect descriptor for this album.”

Music has been Jon's home for decades...from Rock to Alt. Country and anything in between, his solo efforts and many collaborations are full of honest storytelling and good times. With themes like family, friends, and fun, Jon easily sings his way into our hearts. His unmistakable deep and soothing voice, paired with his sneaker scootin' dance moves are sure to entertain!

The Mad Caddies had scheduled a massive 25 year anniversary tour for 2020, but as the world changed it became clear this tour was not happening. That didn’t stop their frontman, Chuck Robertson, from staying creative. Chuck hunkered down and focused on his first solo project, Chuck Robertson & Friends.

From Chuck via his Kickstarter: “With no shows on the horizon for the foreseeable future, we decided to start recording an album. These songs are a departure from my normal music in Mad Caddies, with more of the singer-songwriter, indie rock vibe; but it was really refreshing to finally have an outlet for music that I knew didn’t have a proper place in the Caddies.”

If you know, you know, and Chuck delivers catchy, feel good tunes no matter the moniker. Join us as he brings his first solo album ‘All Out Of Dreams’ to the stage!

Since their 2016 debut album Trippin, The Happys have embodied a vulnerability, setting their honest painful feelings of addiction to a wildly joyful surf-grunge sound. Their second release ‘Bipolar’ focuses on mental health awareness and “Cutting the bullsh*t out of your life”.

What do all of these artists have in common? Doggedness! They didn’t let the pandemic slow their creative efforts, and Doggedness Presents is Proud to host an evening of Rock and Roll and good vibes.

As is the Doggedness Presents Standard, a portion of show proceeds will go back to a local creative non-profit. For this event, we've chosen The Phoenix Theater. Not only is it a massive historical venue, it is also a nonprofit that provides services such as Music Programs, Art Programs, Job Placement services and a Teen Clinic.

Grab your tickets and catch a great show for a great cause! Your ticket purchase will support the touring and local bands, and also support the Phoenix Theater and all of their great community programs they offer.

Doggedness Presents is excited to have Jon Snodgrass, Michael Dean Damron, Russ Rankin and Nick Machado at REEL & BRAND in Sonoma on April 24th! It will be an evening of energetic acoustic rock/folk/country! $12 Pre-Sale, $15 Door. All ages, show starts at 8pm sharp!

***Every Doggedness Presents show donates a portion of ticket sales to a select local creative arts program. For this event, we have chosen ART ESCAPE in Sonoma! Your ticket will get you into the show, support the musicians, and the creative arts program. Check out our Performers page, and our Programs page to find out more about all of these great musicians and amazing Creative Arts Program.

Cant attend but still want to support? Send a donation by clicking below!